Masters of the Spirit Tapestry 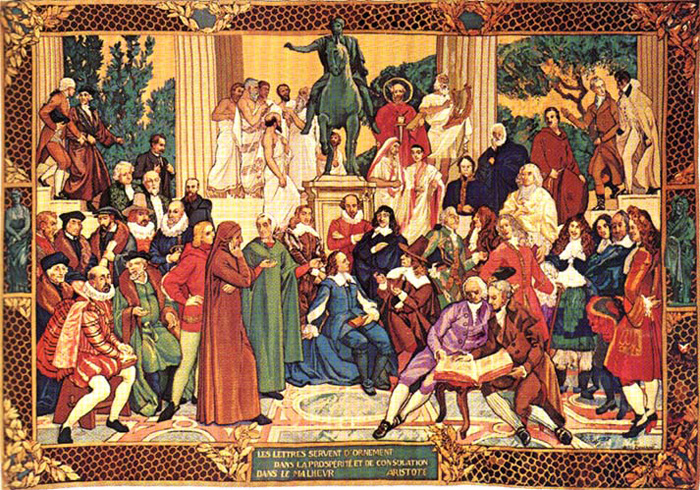 Masters of the Spirit Tapestry

The following article was originally published in JAMA: 218(7):1039, 1971 Nov.15 and is reprinted and made available with permission from Dr. William C. Gibson.

Some time ago the Journal published a description of a modern French tapestry, “Masters of Science,” which hangs in the Woodward Biomedical Library of the University of British Columbia. It was designed by Guillonet, and was worked by Roland of the Gobelin’s staff. Of prime interest to physicians, scientists such as Jenner, Claude Bernard, Pasteur, Roux, Richet, Descartes, and Lavoisier were depicted. Today’s issue of the Journal features on the cover another handsome product of French Genius, by the same designer, “Masters of the Spirit”. It was carried out, however, by a different craftsman who, for reasons which will be appreciated later, shall remain anonymous.

The fact of the matter is that the man whose work we see today was aged 68 at the time of the creation of this colorful tapestry which measures 16 x 11 feet. It too was commissioned by the postwar patron of the new movement in tapestry, Monsieur Antoine Behna. It too resides in the Woodward Library. The talented veteran who worked this spectacular tapestry, proceeding from left to right in the manner of haute lisse, most unfortunately suffered a cerebral hemorrhage. This stroke incapacitated him only temporarily, and he was eventually back at his giant loom, completing the right half of the undertaking.

Thus we have before us the result of a cerebrovascular accident, as well as a control. Students sit before this massive tapestry daily comparing the two halves of the piece. As the reader will see, the change begins just above the head of Marcus Aurelius and the figure of William Shakespeare. (For key see AMAGRAMS, p. 941.) The honeycomb border, so perfect up to that point suddenly becomes irregular both in form and color. Descartes’ face is slightly twisted, and right forefinger of Spinoza, just below that, is greatly enlarged. The legs of Rousseau, Diderot, and Racine are slightly buckled, but worst of all, the faces of Moliere, Boyle, Corneille, and Racine are mere caricatures when compared with the beautiful composure in that of Erasmus on the extreme left. The eyes of Stendhal look like those of a rag doll. Homer’s harp is warped, and the column on which he is leaning is not as sturdy as that on the left half of the tapestry. The trees behind Balzac are quite different from those behind Nietzsche.

Much of the border on the right side and the background are poorly carried out and illustrate the inability of the tapissier to compare the work after his stroke with that before. In fact, his wife was severely rebuked when she called this difference to his attention as it developed. His first retort was that he had been 50 years in this work and he needed no free advice. His second and more forcefully expressed reply was that he was doing better work now than ever–a dangerously arteriosclerotic boast, usually reserved for aging politicians.

The reaction of students in the health sciences, as they pass this tapestry daily, is one of amazement (a) that the worker could finish it after suffering a stroke, and (b) that he could not appreciate the difference between the quality of the right half as compared with that of the earlier left half. They reflect on the meaning of what they see before them and begin to weigh up the political and social implications of an aging population.

Thus, what seemed to Monsier Antoine Behna, who commissioned the tapestry, as un desastre is in reality a textbook of neurology for the students at the University of British Columbia and for other Woodward Library visitors.

Theme
Masters of the Spirit (arts)

Other Information
The weaver was apparently a 68 year old man. (The tapestry is signed Roland, 1954). He suffered a ‘stroke’ part way through the work resulting in the much inferior craftsmanship on the right hand side of the tapestry.

Source of Funds
Donated by the late Mr. P.A. Woodward